Australia’s biggest state has NO strategy to deal with our most precious resource as the worst drought ever sees water run out everywhere – without even a website to tell you what restrictions are where.

A leading water expert says Australia’s biggest state has ‘no over-arching strategy’ to deal with drought, as
Sydney joins much of NSW and the nation in imposing strict water restrictions.

As the country’s most populated city is hit with a complete ban on hosing their gardens, towns like
Murrurundi, in the Hunter, have run so dry water is being trucked in.

Residents there are on extreme, level 6 water restrictions, where they are allowed to shower for just three
minutes, wash two loads of washing a week and banned from watering their lawns or cleaning their cars.

Major Queensland regions, including Cairns, Rockhampton and the Fraser Coast also have restricted
water, while including Melbourne and Canberra are on permanent water-saving rules.

However, despite all this, a startling map lays bare the lack of consistency in how the nation is responding
to the big dry – and Australia’s overly relaxed attitude to our most precious resource. 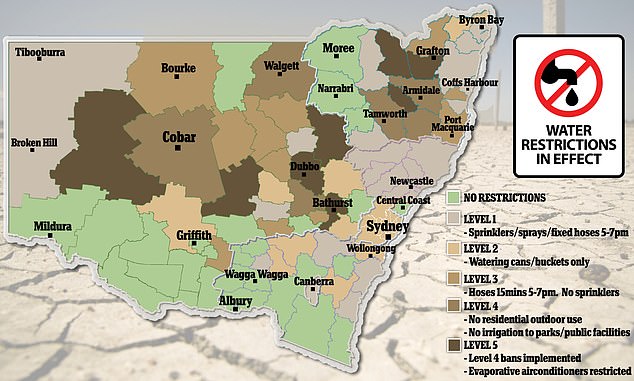 Read more on the website of the Daily Mail

Categories: In the news